The cause of chest pain may be difficult to determine on initial presentation. It is always important to consider ischaemic heart disease (angina or heart attack) as a cause. Ischaemic heart disease is where the blood supply through the coronary arteries is insufficient to supply the needs of the heart muscle . Angina is pain usually precipitated by exertion, eating, emotion or cold but which is relieved by rest or Glyceryl Trinitrate (GTN) and no permanent damage to the heart muscle has occurred.

Chances are someone you know or love has experienced a heart attack. What's worse, you may fall victim to one yourself at some point in life.
Heart disease has been the number-one killer of The consequences of heart disease are far-reaching and personal and while some may feel that keeping their head in the sand will make the problem go away, the truth is that prevention is the best protection.

What Triggers a Heart Attack?


The heart functions in much the same way that a pump does, but instead of depending upon gas for its operation, the heart depends upon a constant supply of blood, which is delivered via arteries located within the wall of the heart muscle. As long as the arteries remain open and able to supply the heart muscle with oxygenated, nutrient-enriched blood, the heart performs very efficiently. If, however, one of these arteries becomes blocked by a clot, the heart muscle downstream becomes deprived of life-sustaining blood and it may die within a matter of minutes. This is what is known as a heart attack.

In some cases, the body is able to form natural bypasses around the blockage so that the heart muscle continues to receive a supply of blood. In other cases, physicians are able to administer medications in the emergency room to dissolve the clot or they are able to open the obstructed vessel with a device known as a stent.
Sometimes heart attacks can be "silent" and the victim is not even aware of the incident. More commonly however, there are symptoms present that may include chest pain or heaviness (which may or may not radiate to the arm or jaw), nausea, vomiting, dizziness, sweating, shortness of breath, heart palpitations and weakness. If you suspect that you or a loved one is having a heart attack, you should call 911 immediately.


What Are My Risk Factors for a Heart Attack?


While everyone is potentially at risk for having a heart attack, there are some groups which are more prone than others to fall victim. Individuals at higher risk for heart attack include males, the elderly, diabetics, smokers, individuals who are overweight or inactive and people who have high blood pressure, high cholesterol levels or a family history of heart disease. A family history of heart disease is defined as having a mother or sister with heart disease prior to the age of 65 or a father or brother with heart disease prior to the age of 55.
While genetics and one's family history cannot be controlled, many of the other risk factors listed above are subject to modification. Your physician can discuss ways to lower your risk of heart attack.

How Can I Prevent a Heart Attack?


Since prevention is always the best medicine, it would be wise to know what you can do to avoid having a heart attack. Most healthy individuals are encouraged to engage in some form of physical activity, such as walking for thirty minutes three times a week.
If you are a smoker, now is the time to stop. Studies have shown that the longer a person remains smoke free, the lower the risk of heart attack. In other words, it's never too late to stop smoking.
What you eat can also affect your risk. Studies have shown that eating a diet high in fruits and vegetables and low in saturated fats can lower the risk of getting many of the conditions which contribute to heart disease, such as diabetes, hypertension and obesity.

Also, you should always take all of your medication as prescribed, particularly if you already have an illness such as high cholesterol that puts you at risk for a heart disease. Your physician may also routinely perform blood tests and ECGs during office visits. An ECG is a painless test using adhesive pads placed on the chest wall to measure the heart's electrical activity.
If all these measures fail, and your physician feels that you are still at an extremely high risk for a heart attack, he or she may opt to take action in advance. After performing certain tests your physician may suggest a procedure known as a PTCA (percutaneous transluminal coronary angioplasty). In this procedure, a wire with a hollow tube on the end is inserted through a small incision in the groin and passed upwards into the heart and into the blocked artery. The artery is opened up and the hollow tube is left in the heart artery to prevent it from becoming blocked again. This surgery is reserved for only the more extreme cases.


How Can I Prevent Another Heart Attack?

After a heart attack, your cardiologist may restrict certain activities for a short time, and he or she may suggest that you enroll in what is known as cardiac rehabilitation. This consists of regular exercise sessions under the watchful eye of cardiac-trained nurses and other personnel. Your cardiologist may also suggest that you undergo routine testing to determine the status of your heart.
Understanding your body and your disease is the best weapon you have in combating heart disease. And if you begin to again have symptoms similar to those experienced at the time of your first heart attack, you should seek medical treatment immediately.


More than 50,000 people die from heart attacks in Australia each year. This is more than the deaths caused by cancer, AIDS and motor accidents combined¹.

Additionally about 400,000 people are hospitalized each year because of heart disease². More worrying is the fact that a high proportion of teenagers are now showing early signs of heart disease.
Poor diet and physical inactivity are the most common risk factors for heart disease. The role of diet and nutrition is influenced by a range of social, cultural, economic and physiological factors, including the available food supply and cost .
The role of fat intake in heart disease is now fairly clearly established. The direct protective effect of specific diets or dietary changes is less clear, but there are general health benefits in promoting healthy eating.
The financial cost of heart disease to the nation is now about $7.6 billion annually. This represents 11 percent of the total health budget. The increased cost of heart disease to the nation by 2011 is expected to be $11.5 billion annually.

HAVE A SEX, LIVE LONGER

Sex protects hearts, according to the ten-year study which found that men who reported the most frequent orgasms had slightly less than half the risk of death as other men, particularly from coronary heart disease. In fact, there appears to be a dose-response relationship between orgasm and risk of death from coronary heart disease, according to the researchers. By increasing the number of his orgasms to 100 per year, a man may actually reduce his risk of death by heart disease by about 36 percent. The researchers included epidemiologists George Davey Smith and Stephen Frankel of the University of Bristol and John Yarnell of Queen's University of Belfast.  An earlier study of aging, conducted at Duke University, found that sexual activity appears to lower the risk of death in men. Women who said they enjoyed sexual contact also appeared to lower their risk of death.
The finding that sexual activity appears to be protective of middle aged men's health contradicts ancient ritual and religious beliefs that sexual pleasure, in particular, orgasm, saps a man's vigor and shortens his life. (British Medical Journal, No. 7123, Volume 315).


One problem with ECG monitoring is its susceptibility to artifacts due to such problems as poor electrode contact or disturbances from skeletal muscle. Noise due to myoelectric activity primarily contains frequency components greater than 15 Hz
If the ECG signal is noisy, skin preparation measures may need to be evaluated and corrected. The ECG electrodes may need to be moved farther away from the pacing electrodes, moving the sensitive ECG pick-up away from the source of the current. Finally, selecting another ECG lead may produce a clearer trace. ECG signal noise may also be caused from electromagnetic interference (EMI) which may result from close proximity to equipment such as diathermy, radios or cellular phones. In extreme cases EMI can disable a pacemaker. It is important to keep distance between patients and sources of EMI.
Baseline wander is due to variations in electrode impedance caused by perspiration, respiration, and physical activity.

A damaged patient cable, which may not be apparent to the user, can result in the recording of distorted ECG waveforms and lead to an incorrect interpretation of an ECG.


Telecardiology is set to overtake as the main application of telemedicine in European hospitals in the next five years, according to a new market research report by Frost and Sullivan.  Ageing population, the growing demand for home-based treatments is creating a conducive atmosphere for the uptake of telemedicine as a mainstream technology - especially in remote patient monitoring (RPM). This would benefit patients in terms of convenience and simultaneously allow healthcare facilities to control costs.
Telecardiology networks help improve care by connecting patients with doctors and specialists, regardless of their location. This has greatly improved access to cardiologists for patients in remote, rural areas. These networks also allow immediate consultations with pediatric congenital heart specialists at top hospitals without the need for travel.
Instead of patients waiting a month or more to see a cardiologist, they can now schedule a telecardiology appointment in a more timely fashion – from 24 hours to a week depending on the acuity. A  cardiologists can visit with patients from numerous locations in a single day without hours of travel.
In addition to offering better patient care and saving time, these systems also offer a platform to host continuing medical education (CME) programs, decrease professional isolation and help enhance existing business relationships.
Emergency medical care and training applications for remote sites and viewers are making their way into the mainstream market with their ability to provide cost savings and convenience to healthcare providers," adds Mr. Cherrington.
Remote sites 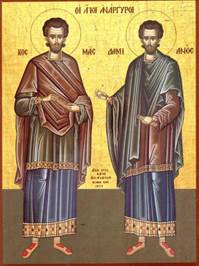 COSMAS and DAMIAN Twin brothers.Phisicians  who accepted no payment, charity which brought many to Christ.Martyr. The two suffered no injury during tortures or their martyrdom. Many fables grew up about the brothers, connected in part with their relics 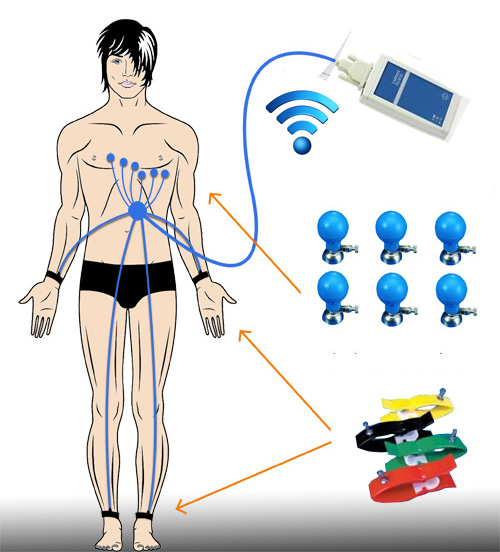